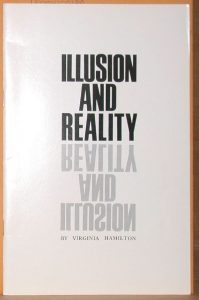 “What I do for a living and what I do daily as, generally, a most pleasurable pastime are one and the same. I make up people and place. I write fion. Occasionally, I write a work of nonfiction, which is no less important to me. But I am predominantly a fiction writer.

The best definition of fiction I’ve come across is a dictionary definition which states that fiction is “an assumption of a possiblility as a fact irrespective of the question of its truth.” Put another way, the fiction writer works within the realm of illusion. Without the benefit of visual aids or even the background music, the writer uses a single system of language of to create the illusion of reality.

A work of fiction is an illusion of life in which characters attempt to transform a basic reality by casting their desires and their subjective views upon it. In essence, the attempt creates internal conflict between elements of the real and the unreal. Characters must sort out the conflict through experiences that enable them to discover what truths finally exist (2).

Most writers work within and through a framework of myths, delusions, dreams and realities of the group to which they bear allegiance. This may hold true for black writers more than for any other American groups, for the survival pattern of their group pervades the generations as though it were an inherent collective trait. Black people, who in recent history were born into bondage as property, had to be different from other people. Even for those born free within the bonded group, slavery must have become a stigma that bled their hearts and marked their minds. . . . The characters I create are decendants of former generations who were born as livestock, as property. That sort of knowledge must corner reality for them and hold it at bay. It must become in part eccentric and in part symbolic for succeeding generations. So it is natural that I try through fiction to break down the symbols and free the reality.

Every fiction has its own basic reality, as does the Street [Hamilton has just given a lengthy example of the derivation of the term Street from slavery times to current times], through which the life of characters and their illusions are revealed, and from which past meaning often creeeps into the setting. The task for any writer is to discover the “reality tone” of each work–the basis of truth upon which all variations on the whole language system are sest. For reality may be the greatest of all illusions. We each know our own reality through which we seek a common ground of communication with others. The fiction writer seeks the common ground by relinquishing her own reality for the creation of a new one. No number of past successses helps this wirter in the creative process of a new writing. For the very process must be created for each new reality. The way to do this is never mastered and never really learned. It would be interesting to create a fiction in which reality and illusion are completely personified. . . .Through the use of words alone, the reader sees, hears, and feels. Both are demonstrating an act of mentality, the connection of minds through which belief is suspended in the interest of illusion. One would be at a loss without the other. I for one would find it impossible to write indefinitely with only myself to read what I had written.. . . For the writer, there is nothing quite like having someone say that he or she understands, that you have reached them and affected them with what you have written. It is the feeling early humans must have experienced when the firelight first overcame the darkness of the cave. It is the communal cooking pot, the Street, all over again. It is our need to know we are not alone.