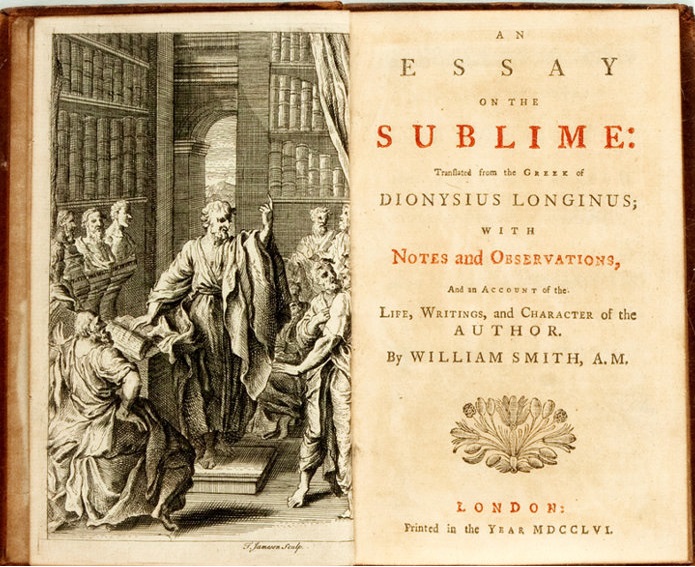 Longinus: “On the Sublime”

Longinus, writing in the classical historical tradition says that the sublime implies that man can, in emotions and in language, transcend the limits of the human condition. Longinus’s approach is contradistinguished from Plato’s declaration of poetic inspiration as dangerous divine madness or the poet as liar. Yet like Plato, Longinus feels that the human was the art or technical aspects, while the sublime was the “soul” or that which eluded our experience of art. In order to understand the sublime, we must have some notion of what exists beyond the human, empirical experience. Longinus explains that this “beyond” is comprehended in terms of metaphor, or in terms of what is absent from the empirical world. Our sense of the sublime is an illusion, which draws the reader to new heights, to the realization that there is something more to human life than the mundane, the ordinary. In fact, the sublime entails a kind of mystery. The sublime is that which defeats every effort of sense and imagination to picture it. It is that whose presence reduces all else to nothingness. It can be defined and described only in symbolic terms, which ironically defies the pictorial arts to sketch it. It remains only for the art of the metaphorical language of poetry to give the suggestion of the sublime.

Longinus’s contribution to conceptions of the beautiful/sublime also includes the poet’s “joining” with this vision of greatness. We gain a greater sense of freedom, by our sense of our capacity to join in this greatness. Hence when we speak of Longinus we think of verbs such as “transport,” “transcend,” “awe-full,” “flight,” “amazement,” and “astonishment.” One particular quotation summarizes this idea: “For, as if instinctively, our soul is uplifted by the true sublime; it takes a proud flight, and is filled with joy and vaunting, as though it had itself produced what it has heard.”

Longinus centers also on figurative language, discussing the great writers of the past and their importance, our “possession ‘by a spirit not one’s own. . . . The genius of the ancients acts as a kind of oracular cavern, and effluences flow from it into the minds of their imitators.” He holds Plato up as a model and an ideal of great literature, thereby answering and defending Plato’s style against his critics. The decline of letters in his day is due not to despotism, but slavery to pleasure and greed. He shows us that great thoughts have been uttered by men of the past and can be uttered again. Sublimity becomes, for him, the source of the distinction of the greatest poets and prose writers, something like a thunderbolt that could strike anywhere. Because of his belief in sublimity, he also believes in the privileging of mental processes. He holds in an almost mystical way that the composer is identified with what he describes; and because of the excitement of the moment of inspiration, the hearer or reader is also a participant in the feeling of sublimity. And so it was that Longinus first brought passion and the concept of readerly complementation to the study of literature.

Edmund Burke: “A Philosophical Inquiry into the Origin of our Ideas of the Sublime and Beautiful

Burke is clearly in the debt of Longinus, but his fundamental orientation is different. Drawing from the empiricism of John Locke, Burke assumes all our knowledge comes by way of sense experience, combing simple impressions into more complex ones. Imagination, for Burke, is more closely aligned with Coleridge’s conception of “fancy.” It operates in two ways, by “representing at pleasure the images of things in the order and manner in which they were received by the senses” and by “combining those images in anew manner, and according to a different order.” Therefore, according to Burke, the imagination cannot create anything “new”; it can only reorder and combine basic sense perceptions.

More important than taste are distinctions involving the sublime. The sublime applies to large, grand parts of nature while the beautiful is evident in small parts. In addition, Burke associates the fear of death, dismemberment, terror, and darkness (e.g., a howling wilderness) with feelings of sublime. Locke does not think that darkness is sign of terror, but Burke feels an association of utter darkness makes it impossible to ascertain one’s safety, sensing immanent danger evokes a feeling of the sublime. He sees a difference between what the mind expects and what occurs in any given situation. Part of his thesis involves the fact that fear robs the mind of reason, hence evoking the sublime. He says:

Whatever is fitted in any sort to excite the ideas of pain, and danger, that is to say, whatever is in any sort terrible, or is conversant about terrible objects, or operates in a manner analogous to terror, is a source of the sublime; that is, it is productive of the strongest emotion which the mind is capable of feeling. I say the strongest emotion, because I am satisfied the ideas of pain are much more powerful than those which enter on the part of pleasure.

In Burke’s terminology, the “passions which concern self-preservation, turn mostly on pain and danger” (55). To make circumstances appear terrible, however, obscurity is necessary. “All privation is great because they are all terrible: Vacuity, darkness, solitude, and silence. Low and intermittent sounds and shadows bring about feelings of the sublime. Above all, the actions of the mind are affected by the sublime.”

Sir Uvedale Price considered the nature of the sublime, but argued in a line consistent with ideas of the picturesque.

Kant says that sublimity does not reside in anything of nature, but only in our mind, insofar as we can become conscious that we are superior to nature within, and therefore also to nature without us (so far as it influences us). Everything that excites this feeling in us, e.g., the might of nature that calls forth our forces, is called then (although improperly) sublime. Only by supposing this idea of the sublimity of that Being which produces respect in us, not merely by the might that it displays in nature, but rather by means of the faculty which resides in us of judging it fearlessly and of regarding our destination as sublime in respect of it. (“Of the Dynamically Sublime in Nature”; Adams, Critical 396). In Kant, “the mind feels itself set in motion in representation of the sublime in nature; this movement, especially in it inception, may be compared with a vibration with a rapidly alternating repulsion and attraction produced by one and the same Object. The point of excess for the imagination is like an abyss in which it fears to lose itself.” (“Analytic of the Sublime” 107, qt’d in Thomas Weiskel’s The Romantic Sublime 105)

Wordsworth on the sublime and the Beautiful: in speaking of seeing the mountains of Langdale pike–

Let me then invite the Reader to turn his eyes with me towards that cluster of Mountains at the Head of Windermere; it is probable that they will settle ere long upon the Pikes of Langdale and the black precipice contiguous to them. If these objects be so distant that, while we look at them, they are only thought of as the crown a comprehensive Landscape; if our minds be not perverted by false theories, unless those mountains be seen under some accidents of nature, we shall receive from them a grand impression, and nothing more. But if they be looked at from a point which has brought us so near that the mountain is almost the sole object before our eyes, yet not so near but that the whole of it is visible, we shall be impressed with a sensation of sublimity.–And if this analyzed, the body of this sensation would be found to resolve itself into three component parts: a sense of individual form or forms; a sense of duration; and a sense of power. . . . A mountain being a stationary object is enabled to effect this in connection with duration and individual form, by the sense of motion which in the midst accompanies the lines by which the Mountain itself is shaped out” (351-2). . . .Individuality of form is the primary requisite; and the form must be of that character that deeply impresses the sense of power. And power produces the sublime whether as it is thought of as a thing to be feared, to be resisted, or that can be participated. To what degree consistent with sublimity power may be dreaded has been ascertained; but as power, contemplated as something to be opposed or resisted, implies a twofold agency of which the mind is conscious, this state seems to be irreconcilable to what has been determined, exists in the extinction of the comparing power of the mind, & in intense unity.(356).

“Imagination . . . so called / Through sad incompetence of human speech” (Prelude 6.592-93). Human sight rises in intensity from memory through salience tot he occlusion of the visible. Imagination also rises “like an unfather’d vapour” to target man’s fight to remain autonomous and self-reliant.